The Real Reason
Compiled from the writings of
Ellen G. White

“As I hear of the terrible calamities that from week to week are taking place in the world, I ask myself, What do these things mean? Are they permitted to come to arouse those who are transgressing the law of God? The most awful disasters, by fire and flood, are following one another in quick succession. The judgments of God are in the land. They speak in solemn warning, saying, ‘Be ye also ready; for in such an hour as ye think not the Son of man cometh.’ (Matthew 24:44).”1

“A spirit of lawlessness pervades every land, and is especially manifest in the great cities of the earth. The sin and crime to be seen in our cities is appalling. God cannot forbear much longer. Already His judgments are beginning to fall on some places, and soon His signal displeasure will be felt in other places.”2

“The judgments of God are in the land. Calamities are following one another in quick succession. Shall we allow these things to be, without telling people what they mean, and how to escape the destruction soon to come upon all the world? Shall we allow men and women to go down into the darkness without having been told how to gain a preparation for the future life?”3

“Satan works through the elements also to garner his harvest of unprepared souls. He has studied the secrets of the laboratories of nature, and he uses all his power to control the elements as far as God allows. When he was suffered to afflict Job, how quickly flocks and herds, servants, houses, children, were swept away, one trouble succeeding another as in a moment. It is God that shields His creatures and hedges them in from the power of the destroyer. But the Christian world have shown contempt for the law of Jehovah; and the Lord will do just what He has declared that He would—He will withdraw His blessings from the earth and remove His protecting care from those who are rebelling against His law and teaching and forcing others to do the same. Satan has control of all whom God does not especially guard. He will favor and prosper some in order to further his own designs, and he will bring trouble upon others and lead men to believe that it is God who is afflicting them.

“While appearing to the children of men as a great physician who can heal all their maladies, he will bring disease and disaster, until populous cities are reduced to ruin and desolation. Even now he is at work. In accidents and calamities by sea and by land, in great conflagrations, in fierce tornadoes and terrific hailstorms, in tempests, floods, cyclones, tidal waves, and earthquakes, in every place and in a thousand forms, Satan is exercising his power. He sweeps away the ripening harvest, and famine and distress follow. He imparts to the air a deadly taint, and thousands perish by the pestilence. These visitations are to become more and more frequent and disastrous. Destruction will be upon both man and beast. ‘The earth mourneth and fadeth away,’ ‘the haughty people . . . do languish. The earth also is defiled under the inhabitants thereof; because they have transgressed the laws, changed the ordinance, broken the everlasting covenant’ (Isaiah 24:4, 5).

“And then the great deceiver will persuade men that those who serve God are causing these evils. The class that have provoked the displeasure of Heaven will charge all their troubles upon those whose obedience to God’s commandments is a perpetual reproof to transgressors. It will be declared that men are offending God by the violation of the Sunday sabbath; that this sin has brought calamities which will not cease until Sunday observance shall be strictly enforced; and that those who present the claims of the fourth commandment, thus destroying reverence for Sunday, are troublers of the people, preventing their restoration to divine favor and temporal prosperity.”4 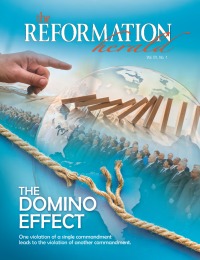