I remember sitting in the wooden pew of a small, white chapel, surrounded by sniffles and sobs repeating as a slideshow of pictures played. A family dressed in black stood on the side of the platform, clinging to each other. The stinging reality that their loved one was gone was hard to contain. At the end of the service, everyone was expected to migrate in a line to briefly look at the pale body for the last time, and greet the family as a sign of respect and support. As I leaned over to look in the casket, I saw an empty shell. No sign of life was left. My eyes could not stand looking for longer than a few seconds, so I hurried on to hug the crying family. When it came time for the burial service, I watched the cream box get lowered into the earth. The family’s eyes were swollen from sobbing and their facial expressions looked plastic.

They focused on the day Jesus would come and call their loved one to life again. They did not have any thoughts of him being resurrected before then. In comparison, before Jesus died, the disciples were told that their Master and Friend would resurrect in three days. If you have ever been to a funeral, the experience is very similar to the experience the disciples had after Jesus died on the cross. Ellen G. White, a writer inspired of God, relayed the scene, “With the death of Christ the hopes of His disciples perished. They looked upon His closed eyelids and drooping head, His hair matted with blood, His pierced hands and feet, and their anguish was indescribable.” (The Desire of Ages, p. 772). The reason they felt so devastated and disoriented was because “until the last they had not believed that He would die; they could hardly believe that He was really dead. Overwhelmed with sorrow, they did not recall His words foretelling this very scene.” (Ibid.).

Have modern day Christians committed a similar mistake? Instead of remembering what Jesus said, we often forget because we are focused on other things. Or worst yet, we do not even search the Bible to see what Jesus has said versus what He has not said. During this time of the year, the Christian world is celebrating Easter.

Yet how many professed followers of Jesus actually look behind tradition and into the Bible to understand all the implications of Jesus’ resurrection? The resurrection of Jesus carries more meaning than just the generic fact that He rose again on the third day.

The resurrection is more than just a historical fact because without this monumental event taking place, the plan of redemption would not have been completed. The inspired apostle assures us, “My little children, these things write I unto you, that ye sin not. And if any man sin, we have an advocate with the Father, Jesus Christ the righteous: and he is the propitiation for our sins: and not for ours only, but also for the sins of the whole world” (1 John 2:1, 2). This verse says that we still sin. No surprise there. If the plan only included Jesus taking the place of our punishment and ended at that, people would still love sin and rebel against God. The problem would remain the problem. Jesus had a work to do after the resurrection and He is still doing this work. That is the work of advocating, as the verse in 1 John says. That does not mean He makes excuses for you to sin. It means He is a priest, presenting His own blood as the perfect sacrifice before the Father. It means He asks, prays, pleads, and stands in your behalf before God, as it says in Hebrews 4:14, “Seeing then that we have a great high priest, that is passed into the heavens, Jesus the Son of God, let us hold fast our profession.” God is so just that He deemed no one else qualified to judge humanity, but only the Divine One who took humanity upon Himself, “For the Father judgeth no man, but hath committed all judgment unto the Son. . . . And hath given him authority to execute judgment also, because he is the Son of man” (John 5:22, 27). It is through this time that Jesus is spending in intercession for us that we have opportunity to be transformed into His likeness by His power. Without a fitness for heaven, we cannot inherit the kingdom.

The resurrection was not only the beginning of the next phase in the plan for our redemption, but it was actually an event that triggered thousands to profess Jesus as the Messiah and their Saviour. Jesus literally shook the world. When the chief priests put all their sweat into keeping Jesus in the tomb—yet He still resurrected—the Sadducees who believed in no resurrection were flabbergasted, the Romans heard and marveled, and the women saw angels at the tomb. When Peter and John heard, they both did a sprint to the tomb site to find Jesus’ wrapping cloth folded. When the two disciples in Luke 24:13 were walking the dusty road to Emmaus on the third day after Jesus’ death, they were enthralled in conversation about the weekend’s events. The crucifixion news was carried like the wind. While the two expressed opinions, Jesus appeared and drew near. The Bible text says their hearts burned within them as He talked with them. Jesus broke the barriers between them and the word of God until they could see the truth for themselves. And the truth was Christ! After the resurrection the disciples awaited the promise of the Holy Spirit, Who indeed came upon them. Everywhere they went, the disciples preached the crucifixion and resurrection of Jesus with power that touched every person’s life. They proclaimed, “Therefore let all the house of Israel know assuredly, that God hath made that same Jesus, whom ye have crucified, both Lord and Christ” (Acts 2:36). Being cut in their hearts the people asked, “What shall we do?” The response was, “Repent, and be baptized every one of you in the name of Jesus Christ for the remission of sins, and ye shall receive the gift of the Holy Ghost. . . . Then they that gladly received his word were baptized: and the same day there were added unto them about three thousand souls” (Acts 2:38, 41).

The reason why the resurrection is most important for you today is because Christ has paved the way to die to sin and be resurrected a new person. You are not yourself while you are under the enemy’s control. But when you accept Christ’s death and resurrection in your behalf, your true identity is locked in who God is—because you were created by Him and in His image. So only when you are one with Jesus, do you become the person you truly were created to be. “For in him dwelleth all the fulness of the Godhead bodily. And ye are complete in him, which is the head of all principality and power” (Colossians 2:9, 10).

Do you feel like your life has been a ceaseless chase to find some answer, some satisfaction, some happiness that will make you whole? Are you tired of trying to be a better person? Does your shame dictate who you are? Do you feel like you cannot let sin go and you fear to ask for help? There is hope. Jesus is alive—He is risen! The question is, will you ask Him to live in you permanently, right now? You are the person He wants to bring into the kingdom. You are the person He would have come for even if you were the only one. You are the one, the target, and the object of His unconditional love. Will you let Him show you the power of His resurrection in your life? I pray you will not pass the opportunity to ask God into your life this very moment. “That I may know him, and the power of his resurrection, and the fellowship of his sufferings, being made conformable unto his death” (Philippians 3:10). 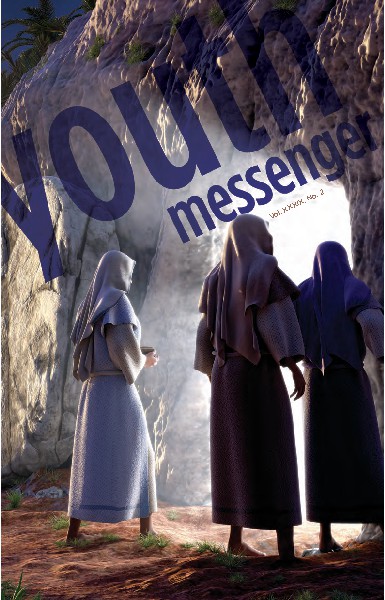