Our first international conference proper was held in Wuerzburg, Germany, in 1921. This meeting was covered by a report which supplies much information about the beginning of the work and the early experiences of the SDA Reformers. For this reason we reproduce it hereunder (transcribed from the Sabbat-Waechter, special issue, 1921): 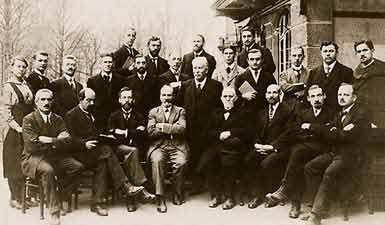 Delegates to the first international convention of SDA Reformers held in Wuerzburg, Germany, 1921.

Due to prevailing circumstances, none of the brethren connected with us in Poland were able to come. . . .

After we had considered Psalm 96 and had, with thankful hearts, entreated the Lord and Saviour to grant us His special presence, we discussed our conference program.

We decided to exchange our experiences in the Reform Movement, to discuss the principles, to confer on our work, and to become united in the proclamation of the third angel’s message through the election of an International or General Conference Committee.

Origin and Progress of Reform in Germany

Confusion and division in the SDA Church in our country began with the proclamation of error by our leading brethren in Hamburg in the matter of Sabbathkeeping during the war and our position toward military service when the war broke out in 1914.

A circular letter of Brother G. Dail (secretary of the European Division), dated August 2, 1914, sent out from Hamburg, contained an appeal for participation in the military and for Sabbathbreaking. Our conscientious conviction as well as that of other sincere brethren was provoked to raise a protest in many places against this distortion of the holy law and rejection of the third angel’s message.

In May 1915, we found out by a roundabout way, through a brother at the General Detachment in Dresden, about a declaration directed by H. F. Schuberth to the Ministry of War in Berlin, in which declaration the wrong stand of the leadership was made known. The churches in Germany had no knowledge whatsoever of this declaration. Through the tract Der Christ und der Krieg (The Christian and War), this error was taught in all the churches, and all the protesting brethren were declared to be "a menace to the peace of the church" and were disfellowshiped. We were termed "the movement of apostasy."

Apart from the movement of protest in the Rhine Province, there was a similar movement at the church in Bremen. None of the brethren who loved the truth more than error intended to leave the church. We wept and lamented over this situation before the Lord. At first we even hoped that our brethren would turn around and repudiate their wrong stand. In September 1915, when we requested a meeting with the leading brethren, we received no reply; we rather noticed greater opposition to the truth. The opposition of the brethren who teach error brought us to the firm conclusion that it is not the will of God to use holy tithe money to diffuse error. We became more and more determined in our desire to associate ourselves together in the truth.

We had our first meeting in the Reform Movement at Wermelskirchen (Rhine Province), July 1915. There, after we had reached full unity in the third angel’s message, we elected a committee to lead out in the work of reformation and appointed a treasurer. In April of the same year, some of the brethren had distributed all over Germany a pamphlet containing the third angel’s message, entitled, Die letzte Gnadenbotschaft (The Last Message of Mercy). The magazine Waechter der Wahrheit (Watchman of the Truth) first appeared in August. It was published in Barmen.

We found good access to the churches everywhere, and many brethren took their stand with Reform. Opposition to the truth, from the leading brethren in Hamburg, kept growing. Our work became the object of direct persecution by the authorities, who had been stirred up against us.

In December 1915 we had our second conference at Gelsenkirchen (Rhine Province), with the presence of 250 brethren. Then the enemy began an even stronger attack against the truth, as he brought error and fanaticism into our ranks.

Many of the brethren will remember the names Sturm, Herms, Fratz, Kersting, Jeschke, Portzek, Schamberg and Bach in connection with so-called divine visions and inspirations. Publications were scattered advocating the celebration of the feast of tabernacles and a different form of self-sanctification. The way of sober truth was blasphemed. These difficulties and trials prepared by Satan impelled us to seek God in prayer and to search the Scriptures and the Testimonies. The Lord answered our petitions by sending us more light and clarity.

After the revolution in Germany, we met in Erfurt (Germany), January 1919, where the Lord showed us that we must scatter the light given us, by means of literature, among His people all over the world. We transferred our printing office and headquarters to Wuerzburg and began an international work, which was richly blessed by the Lord. We saw the need to publish a church paper in which we could narrate our experiences in the third angel’s message. So the first Sabbat-Waechter (Sabbath Watchman) appeared in 1920.

As we have gone through several difficulties, our work in other countries . . . has revealed to us the need to establish a firm apostolic church order so that there would be unity of faith and procedure. During our blessed conference in Fr[ankfurt], in August this year, a letter of invitation was directed to all our brethren abroad, calling them to attend an international gathering for a full unification in the third angel’s message.

During the discussion with a few General Conference leaders in Friedensau, July 1920, the explanations given by them showed that there is a general apostasy from the third angel’s message. Nevertheless, through a representation of the international Reform Movement we were happy to bring the existence of this movement once more to the attention of the General Conference of Seventh-day Adventists. We are conscious of the fact that, in view of this international gathering, we now stand before an important turn in the work of reformation. May this work be instrumental in bringing blessings and salvation to us and to many brethren who were formerly united with us! This is our prayer.

As reported by Brethren K. J. Stiphout and Le Vermeulen, the beginning of the work in The Netherlands, under the Spirit of God, was similar to that in Germany. At a conference in The Hague, 1916, Brother Stiphout and Brother . . . (?), from the Amsterdam church, presented a protest to which the leadership of the conference paid no attention. Also, they sent in the same declarations as in Germany with reference to Sabbathkeeping and the war question. As the consequence, Brother Stiphout laid down his office in the church and, together with other members, he resigned from membership in January 1917. The activities of German fugitives, who brought fanaticism, has been a great hindrance to the development of the work. Nevertheless, the few standard bearers there have the firm hope that, through patient labor, the way will be opened for the loud cry.

According to a report by Brethren C. Adams and O. Welp, the Reformation in Switzerland has had to face greater difficulties than in Germany. Souls were aroused in . . . (?), who were scattered again through the spiritualistic (?) activities of E. Herms. Apostasy and self-exaltation have suffocated, even for these few, the work of reformation, as Brother Carl Spanknoebel reported. In spite of all these things, however, some who are working and praying with us rejoice to see that the third angel’s message is gathering together God’s children.

This is what Brethren K. A. Ekeroth and C. E. Liljebaeck reported:

For a long time we had been deploring the great apostasy among the Advent people and had been praying to God that He would send an awakening among us. How such a thing would take place we had no idea. We had hopes in new leaders; and new leaders came, but there was no reconversion to the old principles. We were disappointed again and again. Last winter a pamphlet came to our hands, entitled To All Our Dear Brethren in Germany, from which we learned that the apostasy existed also in Germany. Constrained by the Spirit of God, we raised the following questions at the conference at Nyhyttan, May 1921:

1. What is the position of the Swedish Conference, which is now in session here, towards Brother Daniells’ views concerning liberty of conscience in connection with the fourth and sixth commandments?

2. What is the position of the Swedish Conference towards the Testimonies of E. G. White: Are they or are they not inspired? May those who are striving for purity and holiness still eat meat?

3. What is the position of the Swedish Conference toward the Reform Movement in Germany and other countries?

4. Have the German church leaders confessed and corrected before the church their deception concerning the law of God, and have they retracted their writings containing doctrinal error, such as Der Christ und der Krieg (The Christian and War), as well as the declarations inserted in the newspapers?

In answer to these questions, Brother Raft gave a long lecture in which he explained that the Reform Movement is fanaticism. As evidence that the work is of Satan, he mentioned a few fanatics. After that we were disfellowshiped. We had long been waiting for a reformation and had believed that the reformation must come through the leadership. But by earnestly searching in the Testimonies we saw that God will use simple men. Some wanted to sound a call for an awakening; these, however, did not regard themselves as worthy and thought that a revival would possibly come through some ministers. We entreated much light and power of God. And then we saw the heaven-appointed way open before us. Our God wants to be with us, and we want to be sanctified through this pure truth. We stand firm like one man with you, dear brethren, in the glorious truth and testimonies of God.