Trying to Appeal to the General Conference Delegation (1922)

As the direct result of circumstances mentioned before, over 3,000 believers found themselves outside the ranks of the Seventh-day Adventist Church in 1922. Their efforts to achieve a reconciliation and unification upon the fundamental principles of the Advent faith were not treated with good will, and many false reports were put into circulation to create prejudice against them.

The General Conference session of Seventh-day Adventists convened in San Francisco, USA, on May 11–31, 1922. The two representatives of the disfellowshiped Adventists arrived in due time and notified the General Conference of the purpose of their coming to the United States. Furthermore, they directed three written appeals to the delegation: first appeal, May 11, 1922, handed by Brother Otto Welp to Elder A. G. Daniells; second appeal, dated May 18, mailed to every member of the General Conference Committee together with a copy of the first appeal; third appeal, dated May 22, handed to Elder Daniells. And there was no answer. The period of waiting stretched from days into weeks without the slightest indication that their petition would be granted. Anxious as to the outcome of their long journey, our two delegates went to the hall where the session was being conducted. There they contacted Elder Daniells personally and requested a hearing before the whole delegation. His answer was: "We cannot allow these questions to come before the whole delegation."

Words would fail to express the depth of disappointment that came to our believers when they heard how the two representatives and their appeals had been treated at the General Conference session. The serious issue which divided the church was not brought up for discussion. It was completely ignored.

As the president, Brother Daniells, refused to allow our representatives to present their case before the assembly, our brethren then had no other alternative than to organize separately, in a definite way, to carry on the gospel work, lifting up the standard and pouring forth the straight truth.

Refusing to recognize the true work of revival and reformation which had begun in the church, and trying to offset the influence the Reform Movement was having upon many members in the church, the SDA leadership made an attempt to introduce a revival and reformation within the ranks of the denomination. We quote from a recommendation made before the assembled delegates of the 1922 General Conference:

"One of the recommendations I feel pressed to make is so important, so vital, that I shall venture to call it an appeal. It is this:

"That during the next quadrennial period a supreme effort be made to bring about a great spiritual revival and spiritual reformation in all our churches throughout the world. . . . If every one of these responsible leaders in God’s cause will first of all gain this spiritual experience and work in God’s appointed way for others, a wonderful reformation will be brought about in our ranks. And, brethren, just that reformation must take place or we are doomed with the rest of mankind. We cannot survive without it."—General Conference Bulletin, 1922, p. 16.

When our brethren learned of this resolution, they knew that a true revival and reformation could not come unless there was a recognition and a putting away of the apostasy; but they hoped that some good would come as a result. Time proved, however, that this was only a passing sentimental revival which was soon forgotten. Similar efforts have been made in succeeding years to give the appearance that at last the long-awaited reformation had come within the church. We would be overjoyed if this should happen, but we cannot pass over the facts as they exist. By changing her position from "no participation" to "complete liberty to participate" in war, the SDA Church changed her position toward the law of God. This is contrary to the Bible (New Testament) and to the Spirit of Prophecy. And this apostasy has never been confessed. No true revival and reformation is possible without first experiencing genuine repentance. The work of reforming the church is not left to the decision of any council or committee. It is rather the prerogative of God to work upon the hearts of men and women and to choose His own instrumentalities. If we reject the messengers whom God sends with a message of reformation, we virtually reject Him.

The leaders of the Adventist Church in Europe realized that, to counteract the work of the Reform Movement, something else had to be done besides talking about revivals and reformations. At the joint meeting held in Friedensau (July, 1920), there was no evidence that those who were directly responsible for the apostasy were actually sorry for what they had done. In the Report of the Negotiations with the Opposition Movement (Protokoll) there is no indication of repentance. So, a declaration containing a formal confession of their error was the expedient adopted by those leaders. During a committee meeting held at Gland, Switzerland, they declared (January 2, 1923):

"We revere the law of God contained in the Decalogue as explained in the teachings of Christ and exemplified in His life. For that reason we observe the seventh-day Sabbath (Saturday) as sacred time; we refrain from secular labor, upon that day, but engage gladly in works of necessity and mercy for the relief of suffering and the uplift of humanity; in peace and in war we decline to participate in acts of violence and bloodshed. We grant to each of our church members absolute liberty to serve his country, at all times and in all places, in accord with the dictates of his personal conscientious conviction."—F. M. Wilcox, Seventh-day Adventists in Time of War, pp. 346, 347.

In addition to this declaration, the leaders of the German Union signed a special statement declaring:

"At the Council of the European Division Committee in Gland, Switzerland, Dec. 27, 1922, to Jan. 2, 1923, our position during the war as it had been expressed in different documents was reviewed, and we herewith by our own signatures confirm anew, what had already been declared at Friedensau in 1920, our regret that such documents had been issued. We are in full harmony with the statement adopted by the Council today (Jan. 2, 1923)."—Ibid., p. 347. 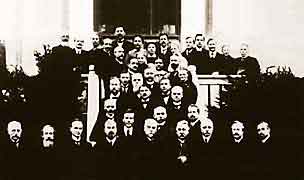 To the Reformers and reform-minded Adventists this semblance of confession brought disappointment because, while seemingly admitting their error, the leaders still confirmed their compromise with the powers of darkness by giving their members "absolute liberty" to continue doing what many of them had actually done during the war. As a matter of fact, their later declarations and actions clearly show that their so-called "repentance and confession" was only a farce. Consider these examples:

SDA Church in Romania: "Doing military service and taking part in war does not involve a covenant with the world, nor is it equivalent to taking sides with Babylon. Participation in war is a mere civil duty."— P. P. Paulini, Prophecy, 1924, p. 41.

SDA Church in Yugoslavia: "According to the Bible standard, ‘Render to Caesar the things that are Caesar’s,’ Adventist Christians fulfill all their duties, including military duties. They conscientiously serve the army with weapons in time of peace as well as in time of war."—Adventism, 1925, pp. 53, 54.

SDA Church in Germany: "Even in the middle of the battle the soldier can show Christian love: toward the disarmed [adversary] he uses kindness, toward the conquered [foe] he uses mercy, toward the prisoners he uses compassion."—Der Adventbote (SDA paper published in Germany), October 15, l927.

SDA Church in Russia: "This sixth assembly of Seventh-day Adventists, 1928, declares and decides that SDAs are required to render to Caesar that which belongs to Caesar and to God that which belongs to God. This means that they are to serve the state in the army and render all forms of service, according to the established rule for all citizens."—Report of the Sixth General Assembly of Seventh-day Adventists, May 12–19, 1928. 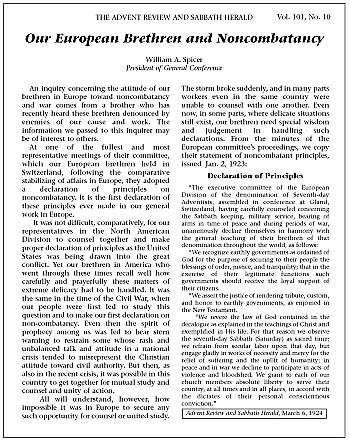 The Advent Review and Sabbath Herald, March 6, 1924. Under the title, our European Brethren and Noncombatancy, at the end of the last paragraph, the Adventist Church made known her new position.

Documentary evidence shows that, during World War II, the official position taken by the Adventist Church permitted or encouraged its members to enter the armed forces as combatants and do even worse than they had done during World War I. Sad to say, among Adventists, absolute freedom for every believer to serve his country as a combatant has become a firmly established position. Mind the following declarations:

"Individual conscience is held supreme at all times and it is therefore possible for an Adventist young man to be either a combatant or a conscientious objector and still be an Adventist."—Bulletin issued by the West Australian Conference, September 25, 1967.

For more evidence on this point, we refer our readers to the book A Turning Point in the History of Adventism published by the Reformation Herald Publishing Association, P. O. Box 7240, Roanoke, VA 24019, USA.

‹ International Conference in Wuerzburg, Germany (1921) up The Name of Our Church ›