One day, Jesus and His disciples went by boat to the opposite end of the Sea of Galilee to a land called Gadara (aka Gergesa). This was a country inhabited mostly by non-Jews—and there they found something rather frightening:

“When [Jesus] was come out of the ship, immediately there met him out of the tombs a man with an unclean spirit, who had his dwelling among the tombs; and no man could bind him, no, not with chains: because that he had been often bound with fetters and chains, and the chains had been plucked asunder by him, and the fetters broken in pieces: neither could any man tame him. And always, night and day, he was in the mountains, and in the tombs, crying, and cutting himself with stones” (Mark 5:2–5).

Can you imagine meeting someone like this? It would be pretty scary, for sure! This man was living around the tombs—but let’s face reality: It’s not normal to want to dwell around dead people. This man was like a wild animal that couldn’t be tamed. No one felt safe around him and he was not happy at all; he was crying nonstop and was actually trying to injure himself on purpose. That’s sick. What a horrible life to be living!

“But when he saw Jesus afar off, he ran and worshipped him, and cried with a loud voice, and said, What have I to do with thee, Jesus, thou Son of the most high God? I adjure thee by God, that thou torment me not. For he said unto him, Come out of the man, thou unclean spirit. And he asked him, What is thy name? And he answered, saying, My name is Legion: for we are many” (Mark 5:6–9).

This man was full of evil spirits—so many that his name had become “Legion”, a word for thousands of soldiers, typically around 3,000–6,000. That’s a lot of demons.

The history continues: “And he besought [Jesus] much that he would not send them away out of the country. Now there was there nigh unto the mountains a great herd of swine feeding. And all the devils besought him, saying, Send us into the swine, that we may enter into them. And forthwith Jesus gave them leave. And the unclean spirits went out, and entered into the swine: and the herd ran violently down a steep place into the sea, (they were about two thousand;) and were choked in the sea” (Mark 5:10–13).

Here is clearly shown what the devil’s plan is for every living creature. Can you picture pigs rushing to commit mass suicide by deliberately drowning themselves? Pigs are not that stupid! This is strange indeed. It’s not normal and it’s very destructive. But that’s the plan of Satan and his evil angels—to drive everyone to misery and ruin everyone’s life.

“And they that fed the swine fled, and told it in the city, and in the country. And they went out to see what it was that was done. And they come to Jesus, and see him that was possessed with the devil, and had the legion, sitting, and clothed, and in his right mind: and they were afraid” (Mark 5:14, 15).

Interesting! In the presence of Jesus, the man was delivered! He was no longer crazy; he was no longer going around naked. He was now “clothed, and in his right mind.” Satan gets people to uncover themselves and be confused and not be able to think straight. But Jesus wants us to be clothed modestly and He gives us a clear, sober mind.

How about the Jewish pig farmers? They were “afraid.” Why afraid? This had been a miracle! Shouldn’t they be glad that the creepy man had been delivered from demon possession, and that he was no longer hanging around scaring people?

“And they that saw it told them how it befell to him that was possessed with the devil, and also concerning the swine. And they began to pray him to depart out of their coasts” (Mark 5:16, 17).

How sad! Perhaps these Jewish pig farmers were living away in the far end of Judea because, according to their religion, they were not supposed to have swine anyway. But now they saw the man restored and the swine gone. This was not what they had wanted. They had wanted to make lots of money in the pork business and they didn’t care at all about the unfortunate man. So, they asked Jesus to go away. They didn’t want to be delivered from their love of money and they didn’t care about the spiritual restoration He had to offer. How tragic! We don’t see anywhere in the Bible that these people ever got another chance to accept Jesus. What a dangerous way to live! They didn’t realize God’s tremendous goodness and mercy toward them:

“Had not Christ restrained the demons, they would have plunged into the sea, not only the swine, but also their keepers and owners. The preservation of both the keepers and the owners was due alone to His power, mercifully exercised for their deliverance.”—The Great Controversy, p. 515. Amazing! God treats us much better than we deserve.

But by rejecting Christ, their loss was much more than just losing some pigs. Those who don’t want to be bothered with Jesus and tell Him just to go away will lose eternity—they’ll totally miss out on enjoying eternal life in Heaven!

Jesus is a Gentleman. He does not force His presence upon anyone who doesn’t want Him around. But thankfully, there at Gadara there was someone who did want Him around:

“And when [Jesus] was come into the ship, he that had been possessed with the devil prayed him that he might be with him” (Mark 5:18).

Jesus had heard the inner cry of the pitiful man—not by what the demons had said through the man, but by seeing the secret longing of his heart, what he had really felt inside. Something only God would be able to know. Jesus could read it, just like He can read your inner heart and mine. Now that the man had been freed from bondage, wouldn’t it have been nice for him to have gotten a chance to join up with Christ and the circle of disciples? Wouldn’t that be a great new calling for this transformed man?

“Howbeit Jesus suffered him not, but saith unto him, Go home to thy friends, and tell them how great things the Lord hath done for thee, and hath had compassion on thee” (Mark 5:19).

So, this man was sent as a missionary in Gadara, where his friends were. Was he disappointed with that calling and tempted to complain about it? Not at all! Was he an effective missionary? Absolutely! In fact, he went beyond Gadara throughout the ten-city region of Decapolis as a powerful evangelist. Did he have results? Let’s see:

“And he departed, and began to publish in Decapolis how great things Jesus had done for him: and all men did marvel” (Mark 5:20). What awesome freedom he now enjoyed! Praise God!

What kind of bondage is oppressing you?

Nobody wants to be a slave. This man had been such a slave to sin that it had completely overpowered him. By God’s grace and mercy, we may or may not have gone as far into sin as this man, but Jesus warns all of us plainly, “Verily, verily, I say unto you, Whosoever committeth sin is the servant of sin” (John 8:34). If we’re stuck in sin, we’re already in slavery!

There are 3 areas that trap all of us:

•  Love of the world

Matthew 4:1–11 tells the amazing history of how Jesus was victorious over the temptations that seize upon us all. His victory can be ours through His strength.

How do we resist these temptations?

We’ve all got bad habits; some have worse ones than others—but it’s all sin, whether big or little. What’s the solution? Claiming the promises of God: “This I say then, Walk in the Spirit, and ye shall not fulfil the last of the flesh” (Galatians 5:16). “There is therefore now no condemnation to them which are in Christ Jesus, who walk not after the flesh, but after the Spirit. For the law of the Spirit of life in Christ Jesus hath made me free from the law of sin and death. For what the law could not do, in that it was weak through the flesh, God sending his own Son in the likeness of sinful flesh, and for sin, condemned sin in the flesh: that the righteousness of the law might be fulfilled in us, who walk not after the flesh, but after the Spirit” (Romans 8:1–4). Take the hand of Jesus that is outstretched toward you and let Him choose where you walk!

There are lots of traps involving all kinds of appetite issues. We read in the book of Genesis that Joseph literally ran away when a lustful woman came to try to seduce him (Genesis 39:10–12). That’s why we are told, “Put ye on the Lord Jesus Christ, and make not provision for the flesh, to fulfil the lusts thereof” (Romans 13:14). Do not let sin be convenient. Stay away from places that are tempting. Otherwise, it’s way too easy to fall into the sin of presumption.

Love of the world is another big temptation. Pride, vanity, envy, greed, and selfish ambition all bind us to this sin-fallen world and keep us in chains of bondage. But we’re told, “All that is in the world, the lust of the flesh, and the lust of the eyes, and the pride of life, is not of the Father, but is of the world” (1 John 2:16).

This is why Jesus came to earth—it was to deliver us! He “gave himself for our sins, that he might deliver us from this present evil world, according to the will of God and our Father: to whom be glory for ever and ever. Amen” (Galatians 1:4, 5).

Trust the promise of Him who was tempted like as we are but overcame in our behalf: “The Spirit of the Lord GOD is upon me; because the LORD hath anointed me to preach good tidings unto the meek; he hath sent me to bind up the brokenhearted, to proclaim liberty to the captives, and the opening of the prison to them that are bound” (Isaiah 61:1).

Yes, the creative power of the Creator is able to make each one of us into a new creation if we invite Him to do so! “If the Son therefore shall make you free, ye shall be free indeed” (John 8:36). Amen! 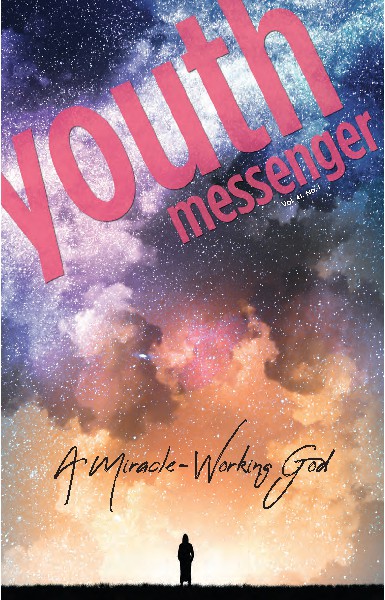