The Sword of the Spirit
Jared Chapman

It cuts deep. Nothing quite leaves our inner selves as exposed as this does. Whatever lies beneath the surface is brought to the forefront of our senses when we come in contact with the Word of God. The apostle Paul described this experientially when he wrote under inspiration, “For the word of God is quick, and powerful, and sharper than any twoedged sword, piercing even to the dividing asunder of soul and spirit, and of the joints and marrow, and is a discerner of the thoughts and intents of the heart” (Hebrews 4:12).

“The warfare against self is the greatest battle that was ever fought.”—Testimonies, vol. 3, p. 106.

The origin of the whole great controversy was found in putting self in the place of God. It’s this tendency we battle against in the day-to-day trenches of life. A.T. Jones brilliantly describes what was going on the mind of Lucifer, an experience to which we can all relate:

“ ‘Thine heart was lifted up because of thy beauty, thou hast corrupted thy wisdom by reason of thy brightness.’ [Ezekiel 28:17.] Being ‘perfect in beauty’ he looked at himself instead of to Him who gave him this perfect beauty; and began to contemplate himself, and to admire himself. Then, as the consequence, he grew proud of himself, and began to think that the place which he occupied was too narrow for the proper, profitable, and full display of the ability which he now gave himself the credit of possessing. He concluded that the place which he occupied was not fully worthy of the dignity which now in his own estimation merged in him.

All day long this battle goes on. Naturally, we end up living our lives in this selfish state. The fight/flight response mode becomes our internal home. We try to control every situation we end up in, we’re afraid of letting go and trusting anyone other than ourselves. Lies are told to self-protect, to cover the many flaws that continue to exist despite our best attempts to better ourselves. Life is lived on the run as we constantly try escape facing the person we really are. Criticism reigns in our daily conversation, as we attempt to minimize our mistakes to appear better than we actually are.

And then we encounter Him.

The apostle Paul describes what He sees:

“Neither is there any creature that is not manifest in his sight: but all things are naked and opened unto the eyes of Him with whom we have to do” (Hebrews 4:13). [Emphasis added.]

The question is: how will we respond to exposure? Will we run and hide like Adam and Eve in the garden or will we stand exposed and allow our nakedness be covered by the only One able to cover all our evil and shame. Sadly, 2,000 years ago this was the response to the exposure the Word incarnate caused.

“And this is the condemnation, that light is come into the world, and men loved darkness rather than light, because their deeds were evil. For every one that doeth evil hateth the light, neither cometh to the light, lest his deeds should be reproved” (John 3:19, 20). [Emphasis added.]

The sword that we so desperately need in order to fight the war against self, we often leave behind. It’s this sword that cuts away at the parts of us that need healing. Without it, we walk around not even knowing what is going on deep down inside. Ellen White comments:

“We need not say, ‘The perils of the last days are soon to come upon us.’ Already they have come. We need now the sword of the Lord to cut the very soul and marrow of fleshly lusts, appetites, and passions. May it pierce and divide in a far greater degree than it has ever yet done. May all the proud be cast down. May the carnally secure be drawn from the refuge of lies with which they have sought to deceive the people of God. May it cut away their self-righteousness and open the eyes of the blind, that they may see that they are not whole in the sight of God.”—Testimonies to Ministers, p. 414.

“The Word is to be diligently searched, for the ministry of the Word discovers the imperfections in our characters and teaches us that the sanctification of the Spirit is a work of heavenly devising, presenting in Christ Jesus the true perfection that if maintained will become a perfect whole in behalf of every soul. We are educated in Bible lines to become complete in Christlikeness and to see His Father’s face in Him who gave His own life for the saving of the soul.”—Our Father Cares, p. 129.

She goes onto describe the incredible experience of the disciples before the Holy Spirit was outpoured. The sword was finally allowed to have full effect.

“After Christ’s ascension, the disciples were gathered together in one place to make humble supplication to God. And after ten days of heart searching and self-examination, the way was prepared for the Holy Spirit to enter the cleansed, consecrated soul temples. Every heart was filled with the Spirit, as though God desired to show His people that it was His prerogative to bless them with the choicest of heaven’s blessings.

“What was the result?—Thousands were converted in a day. The sword of the Spirit flashed right and left. Newly edged with power, it pierced even to the dividing asunder of soul and spirit, and of the joints and marrow. The idolatry that had been mingled with the worship of the people was overthrown. New territory was added to the kingdom of God. Places that had been barren and desolate sounded forth His praises. Believers, reconverted, born again, were a living power for God. A new song was put in their mouths, even praise to the Most High.

“Controlled by the Spirit, they saw Christ in their brethren. One interest prevailed. One subject of emulation swallowed up all others—to be like Christ, to do the works of Christ. The earnest zeal felt was expressed by loving helpfulness, by kindly words and unselfish deeds. All strove to see who could do the most for the enlargement of Christ’s kingdom. ‘The multitude of them that believed were of one heart and of one soul’ (Acts 4:32).”—Ye Shall Receive Power, pp. 286, 287.

It’s when we’ve realized who we really are that He can cover us. When we finally stop running, He catches up and passes by. . . .

“Later I passed by, and when I looked at you and saw that you were old enough for love, I spread the corner of my garment over you and covered your naked body. I gave you my solemn oath and entered into a covenant with you, declares the Sovereign Lord, and you became mine” (Ezekiel 16:8, NIV).

The resting place is thus found when we reach the point when we realized we are nothing and He is everything. This is exactly where Elijah arrived before the rain came.

“He ‘said to his servant, Go up now, look toward the sea. And he went up, and looked, and said, There is nothing. And he said, Go again seven times.’ The servant watched while Elijah prayed. Six times he returned from the watch, saying, There is nothing, no cloud, no sign of rain. But the prophet did not give up in discouragement. He kept reviewing his life, to see where he had failed to honor God, he confessed his sins, and thus continued to afflict his soul before God, while watching for a token that his prayer was answered. As he searched his heart, he seemed to be less and less, both in his own estimation and in the sight of God. It seemed to him that he was nothing, and that God was everything; and when he reached the point of renouncing self, while he clung to the Saviour as his only strength and righteousness, the answer came.”—The Review and Herald, May 26, 1891. [Emphasis added.]

And as we go throughout the years, may we daily let the sword do its work to cut away at our tendencies to protect and rely on ourselves and direct us instead to rely totally on Him!

“We must gather about the cross. Christ and Him crucified should be the theme of contemplation, of conversation, and of our most joyful emotion. We should keep in our thoughts every blessing we receive from God and when we realize His great love we should be willing to trust everything to the hand that was nailed to the cross for us.”—Steps to Christ, p. 103. 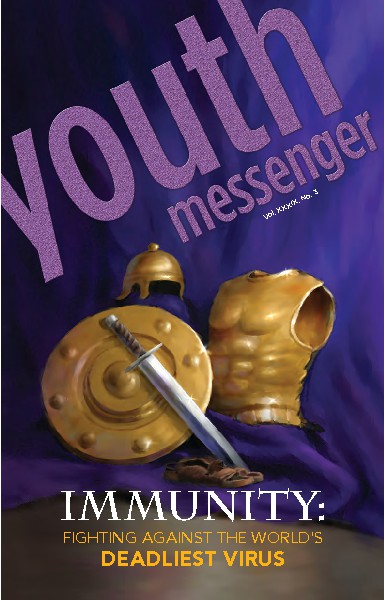