In 1776 in the New World, humans were not trusted with being infallible. After centuries of rule by the experts of Europe, the founders of what would become the leading nation of the free world could see that politically powerful people sometimes struggle with distinguishing between what is good for all the people and what is good for the powerful people. It is dangerous to let a human have political and religious power.

These founders created a government that would be directed by the majority of the citizens of the country. Whoever could communicate the interests of the people best, would likely receive political power. But the founders placed many limits on those who receive political power. Some of those limits, such as division of powers, provided authority for a term of only a few years, and provided for impeachment.

But the greatest limit on political power was the agreement that morality and decency were determined not by majorities but by a Higher Wisdom. Every citizen and every ruler was subject to a higher law than what could be created in statute books and from the judicial bench. The expression “no one is above the law” is well known. The word “law” in the expression referred not only to the laws made by the majority of people through the legislative branch of government, but also to so-called Natural Law. The founders used terms like “self-evident” to refer to the discovery of truths too objective to be chosen by the majority. They talked about nature and nature’s God. Certain rights were held to be higher in authority than any political vote. Religion and the press were placed outside of the jurisdiction of the government because they were in the service of Someone more authoritative than any democracy. The founding documents of the Declaration of Independence and the United States Constitution derived their authority from sources independent of humanity.

How different would have been a Declaration of Independence rooted only in democracy! Instead of self-evident truths, it might have come from the highest polled political opinions. The argument might have been presented to the British that their government was being left because a majority vote carried the day. But there is no pretense that this sprung from the sway of human opinion. Instead, it was the recognition of a higher definition of justice. America was holding the English to account for being unjust even if the majority wanted the injustice. Essential to the origin of the nation was the acceptance of rights that are an independent and objective truth set by God and unable to be altered by any vote of humanity.

When truth is established through democracy there is no higher authority to hold the mob back; there is no protection for the minority and there ceases to be any human rights. For all rights are a recognition of truths that transcend any democratic authority.

An acceptance of this higher wisdom required the citizens of that newly-formed nation to accept each other as equally the children of the same Creator. No political faction was absolutely accurate, and there was room for improvement in all. Truth was not created by the consensus of a majority but accepted as the wisdom of an Omniscient Father. The humility of recognizing an independent and objective “self-evident” truth that all must submit to equally prevented the people from endlessly persecuting those that disagreed with them. For it is a fundamental fact that humans will destroy each other as they divide against each other unless a spiritual power holds back raw impulses in subjection to a non-human higher authority. There is no other possibility.

Today we are assured by our contemporaries that the Christian God was a fraud of the times accepted by only some benighted and cruel founding fathers. We are typically asked not merely to respect, but to more fully appreciate non-Christian religions with their own morality. We are told that morality is nothing more than whatever we decide it to be and that we should make room for the moralities of the newcomers. Of course, those that argue such ideas do not completely believe their own arguments. No one wishes to roll back laws against murder and theft just because a majority might back such initiatives. In fact, it was the moralities of those other religions that perpetuated the class systems and endless violence that has plagued our planet for its existence.

The contemporary problem is not that we are diverse and technology allows us to ignore each other and colonize online into homogenous groups. The problem of modern society is that we have impeached God and there is nothing left to prevent us from using naked political power to destroy ourselves as we try to force the rest of the world to be more like ourselves and less like themselves.

As a society, we have impeached God and now we suffer the consequences. Why did we “fire” the Creator? There is no one single answer. No trial was ever held. Witnesses were often brought but never cross-examined. Documents were presented but never tested and shown to be unbiased and honest. Decades have witnessed the constant attack on the Founder of the Universe and few have really addressed the legitimate merits of the arguments for or against His impeachment.

“For failure to prevent and eliminate evil in our world; for inattention to the needs of each person and animal on the planet, the God of Christian Revelation is hereby impeached with any of His ideas and all of His demands.”

With such an article of impeachment before humanity, each injury and frustration is blamed on the Divine. Every human complaint is treated as a bona fide reason for the rejection of God.

Of course, any honest examination of this impeachment would have to ask whether there was any other source of evil, any other contributor. Did God sufficiently define morality and immorality? Did He warn us of evil and its consequences? Does evil have a promoter all its own? Have we as humans rejected God and intentionally chosen evil and then blamed God for our own choices? These questions demand attention if we are to examine whether God should be in control of our own conscience and life trajectory or be impeached. Any idea of impeaching God is serious and should be taken with all the seriousness that it demands. But our world rushes on, rejoicing in making God apparently irrelevant . . . at least until we suffer the consequences of our own actions. Having rejected a neutral referee, we are left to the reality that there is no right or wrong left in the world except by consensus. And humans with their natural predisposition to do evil, will never reach a consensus against all evil. Some will oppose theft, others will defend it. Some will oppose lying, others will defend it. Each temptation will have some who try to protect it.

When there is no greater authority than crowds and mobs, those mobs become violent. Hateful words and cruel actions are the natural tools of those insecure in the discovery of truth. The heat of argument and cruelty is used to cover up for the absence of the light of truth and reason. When others are not able to see it our way, we are prone to “help” them to see. And that propensity to force “help” upon others endlessly divides us until we ourselves will be conquered.

Some thoughts to ponder

A divided population in any nation or body of nations is doomed to self-destruct unless it can hire an independent and objective God again to define and maintain morality. This God must not be the state, for free nations believe in the separation of church and state. A state that defines and forces its own brand of religion is a cruel tyrant. No, we need just such a God as the one that has been impeached.

Unfortunately, many churches have failed us here. Instead of reminding us of a transcendent God, they have taught a God that makes us feel good, much like Santa Claus. Give God a few prayers and cookies and milk and He should be good for a pay raise at work and a couple of healings in the family. This is a cheap god, unworthy of admiration and submission. Churches have failed us and preachers have misled us. But God is not what comes out of a preacher’s mouth or a church’s theological department.

Above all our pettiness, there stands a benevolent, interested, awful, majestic Wisdom. He declares what is right and what is wrong. He creates human rights and keeps accurate track of human wrongs. He patiently waits while we make a terrible mess of His creation and demonstrate our ingratitude for His grace. He offers to work for us, if we will only hire Him. He will set this world straight and punish those that have ruined His work. He will triumph before long. A good examination of the Bible, not to distort and reject it, but to consider the qualifications of its God for being hired to maintain morality is our only hope for the future. In submission to a Higher Being, we can abandon the desperate war on our fellow humans. We are not in charge of determining or defending truth. But we can demonstrate what it means to find that truth and be made free by that truth. We can demonstrate a holier, happier life than the current climate fosters. Let us pledge ourselves to this noble cause. 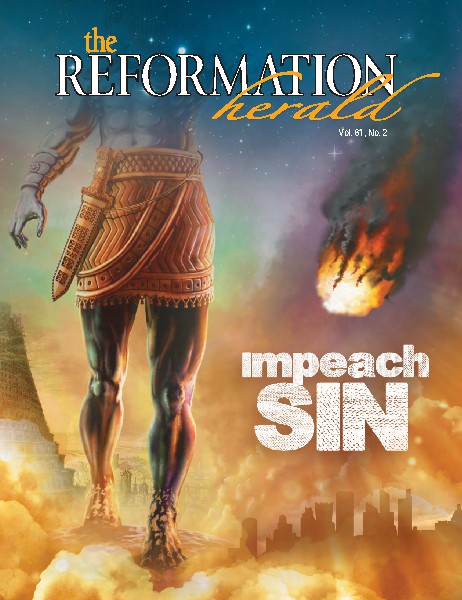