There is a lack of care and economy in every department of this institution. Much is lost that might and should be saved. Many of these losses are caused by a neglect to look after little matters. The workers have thought it their duty to attend to the larger responsibilities, but there are hundreds of leaks daily that are not thought of or cared for; and the loss in a year is by no means small. Here is one of the special defects that exist at the Sanitarium.

The helpers at the Sanitarium should not feel at liberty to appropriate to their own use articles of food provided for the patients. The temptation is especially strong to indulge in things allowed to newcomers, who must be induced gradually to correct their pernicious habits. Employees have no right to help themselves to crackers, nuts, raisins, dates, sugar, oranges, or fruit of any kind; for, in the first place, in eating these things between meals, as is generally done, they are injuring the digestive organs, and again, those who partake of these things are taking that which is not theirs. No food should pass the lips between the regular meals. Temptation is constantly before them to taste the food which they are handling; and here is an excellent opportunity for them to gain control of their appetite. But food seems to be very abundant, and they forget that it all represents so much money value. One and another thoughtlessly indulge in the habit of tasting and helping themselves, until they fancy there is no real sin in the practice. All should beware of cherishing this view of the matter, for conscience is thus losing its sensitiveness. One may reason, “The little that I have taken does not amount to much;” but the question comes home, Did the smallness of the amount lessen the sin of the act? Again, the little which one person takes may not amount to much; but when five act on the same plan, five littles are taken. Then ten, twenty, or even more may presume in the same way, until every day, the workers may, to their own injury, appropriate many little things that they have no right to touch. Many littles make much in the end. But the greatest loss is sustained by the ones who digress; for they are violating the principles of right, and learning to look upon transgression in small matters as no transgression at all. They forget the words of Christ, “He that is faithful in that which is least is faithful also in much; and he that is unjust in the least is unjust also in much” (Luke 16:10).

When an effort is made to correct these practices, it is generally received as an evidence of stinginess on the part of the managers; and some will make no change, but go on hardening the conscience until it becomes seared as with a hot iron. They rise up against any restriction, and act and talk defiantly, as though their rights had been invaded. But God looks upon all these things as theft, and so the record is carried up to heaven.

The angels in heaven have a wider and more elevated sphere of action than we; but right with them and right with us are one and the same thing.

In such an institution as the Sanitarium, where many are laboring together, some will do what they would not think it honest to do were they separately employed. They would have more respect for their reputation than to be found faulty in any of the so-called little matters. A person employed in a private family would not dare to take such liberties with his employer’s property as are taken at the Sanitarium. The helpers influence one another to do unlawful acts; and they do not realize that they are, through indulgence of self, wronging one of God’s instrumentalities, and crippling its powers. The fact that several are doing the same thing does not lessen their guilt. It is the act itself that is wrong, whether performed by many or by few.

Those who are employed at our Sanitarium have in many respects the best advantages for the formation of correct habits. None will be placed beyond the reach of temptation; for in every character there are weak points that are in danger when assailed. Those who begin to be careless of their steps will find that before they are aware of it their feet will be entangled in a web from which it is impossible for them to extricate themselves. It should be a fixed principle with all to be truthful and honest. Whether they are rich or poor, whether they have friends or are left alone, come what will, they should resolve, in the strength of God, that no influence shall lead them to commit the least wrong act. One and all should realize that upon them, individually, depends in a measure the prosperity of the Sanitarium.

Whatever is done should be done with that exactness and thoroughness which will bear inspection.

Christ resisted Satan in our behalf. We have the example of our Saviour to strengthen our weak purposes and resolves; but notwithstanding this, some will fall by Satan’s temptations, and they will not fall alone. Every soul that fails to obtain the victory carries others down through his influence. Those who fail to connect with God, and to receive wisdom and grace to refine and elevate their own lives, will be judged for the good they might have done, but failed to perform because they were content with earthliness of mind and friendship with the unsanctified.

As my guide conducted me through the different apartments, the lack of economy everywhere stirred my soul with grief; for I had a full sense of the debt hanging over the institution. The petty dishonesty, the selfish neglect of duty, were marked by the recording angel. The waste permitted here and there in the course of a year amounts to a considerable sum. Much of this might be saved by the helpers; but each will say, “It does not belong to me to look after these things.” Would they pass these things so indifferently if the loss were to be sustained by themselves?—No; they would know exactly what to do, and how to do it; but it makes all the difference that it belongs to the institution. This is the fruit of selfishness, and is registered against them under the heading of selfishness.

Some have labored faithfully, while others have done their work mechanically, as though they had no interest in it, except to get through as quickly as possible. Order and thoroughness were neglected because no one was near to watch them and criticize their work. Unfaithfulness was written against their names.

Faithfulness in the work

The helpers should take Jesus with them in every department of their labor. Whatever is done should be done with that exactness and thoroughness which will bear inspection. The heart should be in the work. Faithfulness is as essential in washing dishes, sweeping the floors, and doing chamber work, as in caring for the sick or administering baths. Some may receive the idea that their work is not ennobling; but this is just as they choose to make it. They alone are capable of degrading or elevating their employment. Would that every drone might be compelled to toil for his daily bread; for work is a blessing, not a curse. Diligent labor will keep up from many of the snares of Satan, who ever finds some mischief for idle hands to do.

None of us should be ashamed of work, however small and servile it may appear. Labor is ennobling. All who toil with head or hands are working men and women; and all are doing their duty and honoring their religion as much while working in the laundry or washing dishes, as they are in going to meeting. While the hands are engaged in the most common labor, the mind may be elevated and ennobled by pure and holy thoughts. When any of the workers manifest a lack of respect for religious things, they should be separated from the work. Let none feel that the institution is dependent upon them.

Helpers who have been longest at our Sanitarium should now be responsible workers, reliable in every place, faithful to duty as the compass to the pole. Had they rightly improved their opportunities, they might now have had symmetrical characters and a deep, living experience in religious things. But many of these workers have separated from God. Religion is laid aside. It is not an inwrought principle, carefully cherished wherever they go, into whatever society they are thrown, proving as an anchor to the soul. I wish all the workers carefully to consider that success in this life, and success in gaining the future life, depends largely upon faithfulness in performing the duties just where God has placed them.

The perfection of God’s work is as clearly seen in the tiniest insect as in the king of beasts. The soul of the little child who believes in Christ is as precious in his sight as are the angels about his throne. “Be ye therefore perfect, even as your Father which is in heaven is perfect” (Matthew 5:48). As God is perfect in His sphere, so may man be perfect in his sphere. Whatever the hand finds to do should be done with thoroughness and dispatch. Faithfulness and integrity in little things, the performance of little duties, and little deeds of kindness will cheer and gladden the pathway of life; and when our work on earth is ended, every one of the little duties performed with fidelity will be treasured as a precious gem before God.

If this institution is what God designed it should be, as His instrumentality it will not copy any institution in our land in its practices or moral standing. It will stand as a peculiar institution, governed and controlled after the Bible standard. No motive will be of sufficient force to move those engaged here from the straight line of duty. It will be reformatory in all its teachings and practice. There will be no uniting in closer harmony with the world in order to receive worldly patronage. If Jesus presides in the Sanitarium, there will be a greater and more distinct separation from the world. Pleasure cannot entice from the way of justice. Those who are under the control of the Spirit of God will not be found seeking their own pleasure or amusement. They will answer the injunction, Come out from among them and be separate, touching not the unclean, and in no wise partaking of sin. They will aim to reach the high, pure, noble, elevated standard erected by our Lord Jesus Christ. The world, in its practices, and ways, and manners, will have no attractions to entice from duty. 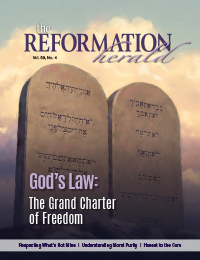