It was a dream come true. . . . It began with a chat on a veranda in Bolivia at the 1st Symposium of Music in the South American Region. Then, at the summer vacation music camp organized by the Brazilian Unions, the inspiration ran higher, and for the first time, the plan was actually put on paper (a paper napkin to be specific!).

What was the dream? A multinational choir and orchestra of Reformers that would come together to unite their talents to praise God at the Spiritual Meetings to follow the 22nd SDARM General Conference Session! Not just groups from here and there—but everyone together.

Search was immediately made for a venue for the rehearsals. Of course there had to be rehearsals—at least for a few days! People would be coming from various countries and continents—how could they unite in technically difficult music if they did not rehearse? This could not just be something casually thrown together—it had to be assembled as carefully and reverently as possible in the fear of God.

Scheduling would be a challenge. In the United States and many other places, the early part of the academic school year at all levels—from elementary grades through university—is heavily underway in the first week of September. We wanted to involve a lot of our youth in this project—but what conscientious youth would be willing to risk their academic success by trying to get excused from their important weekday classes to participate in an all-day activity outside of school or college? Very few—but the plan still went forward.

The GC brethren graciously provided us extra space at their venue and little by little, the musicians began to sign up to participate. A balanced orchestra was needed—and some of the vital instruments were able to come into the picture only at the eleventh hour through the power of prayer to our mighty God who mercifully heard our petitions.

The idea of having this international orchestra and choir was inspired by a grand convocation in Bible history when at the dedication of the temple in the days of Solomon, skilled musicians were chosen to praise God—and the Holy Spirit was poured out in great measure:

“It came even to pass, as the trumpeters and singers were as one, to make one sound to be heard in praising and thanking the Lord; and when they lifted up their voice with the trumpets and cymbals and instruments of musick, and praised the Lord, saying, For he is good; for his mercy endureth for ever: that then the house was filled with a cloud, even the house of the Lord; so that the priests could not stand to minister by reason of the cloud: for the glory of the Lord had filled the house of God” (2 Chronicles 5:13, 14).

How were the trumpeters and singers able to be “as one”? Let’s face reality—this does not happen by accident! The truth is that painstaking, diligent effort in advance is required to bring musicians to perform together “as one”!

So the musicians arrived early to begin intensive rehearsals on September 7 and continued daily before departing on September 10 to the Salem Civic Center. Only three days available for an orchestra and choir formed mostly of nonprofessionals. . . . It all seemed impossible, but God somehow brought it together. You could feel the joy. You could sense the heartfelt dedication to this common goal.

Existing groups of all ages from around the world also signed up to share their special music items. They rehearsed arduously in their local areas for months in advance. The results were inspiring. The choirs from Canada, for example, assembled from various towns in that chilly part of the world—driving long hours in order to be able to practice together. The beautifully elegant custom-designed gowns of their ladies and the delightful robes of their children’s choir added a crowning touch to the event. The sweet sincerity of their voices moved the hearts of us all.

Other groups were also an inspiration—in fact, all of them were! The observation was made that at this event, the music was not worshipped, neither the musicians, but rather God was truly worshipped with the music! All glory and thanks go to Him. Would you like a sample? Just go to www.sdarm.org and click on the “sacred concert.” 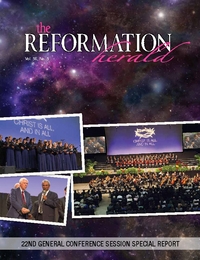