Lessons from Jesus’ Childhood: In Favor with God and Man 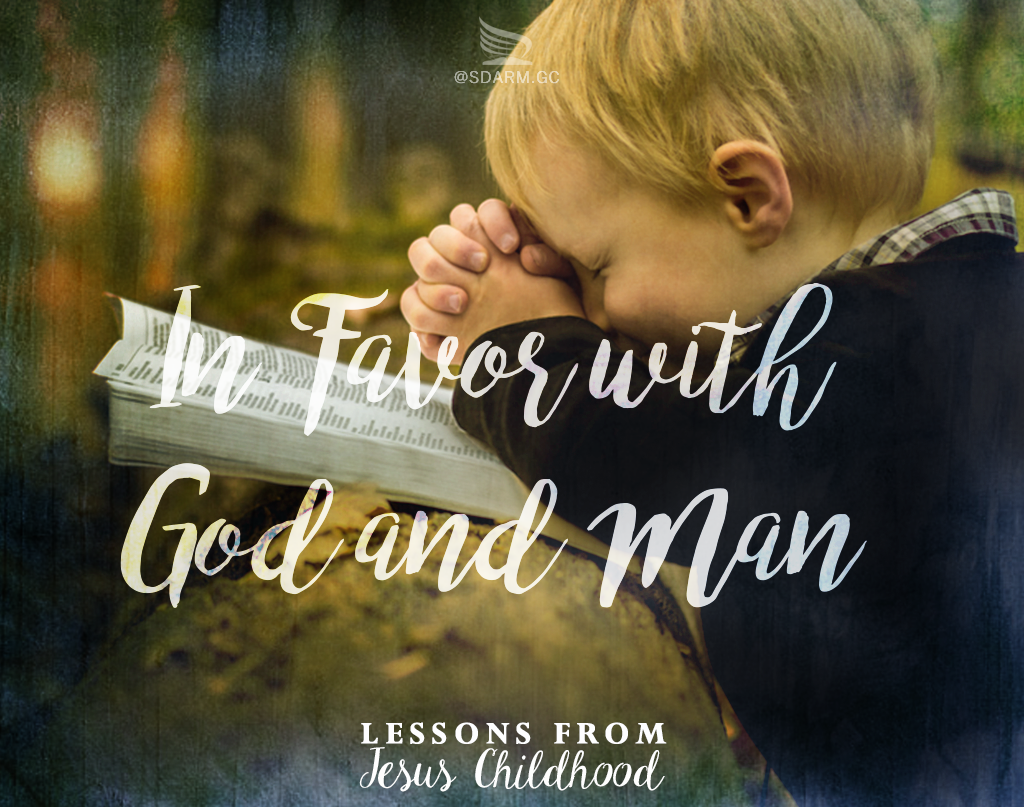 Luke 2 offers a glimpse into Jesus' childhood and youth. It says, “Jesus increased in wisdom and stature, and in favour with God and man,” (Luke 2:52). What does it mean to be in favor with God and man? Is that possible for us to accomplish?

IN FAVOR WITH GOD

Being found in favor with God is the Christian’s priority and life's work. It means to obey His law and become like Him. During His childhood, Jesus developed at different stages just like you and me. He was a helpless babe. He learned to walk and speak. He learned to read and write. The Spirit of Prophecy says that what set Jesus apart was that “at each stage of His development He was perfect, with the simple, natural grace of a sinless life” (Christ’s Object Lessons, p. 83).

Regardless of age, we are each called a child of God. We are each on a journey towards perfection: "Be ye therefore perfect, even as your Father which is in heaven is perfect," Matthew 5:48. In each stage of development in our Christian life, let us aim to be perfect.

Our natural instincts are impure, sinful, and fatal. Sin is often excused—or encouraged—by attributing it to nature. “Oh, but it’s natural…” Sexual promiscuity, selfish instincts, pride—whenever you hear it said that it is “just human nature” remember that we are called to crucify our human nature with Christ daily.

This is how we grow in favor with God: through daily sanctification—the process of becoming new creatures who love Him more and the world less. We cannot have a stagnant faith. We allow Him to work within our hearts so that we may develop a character more like His. Then one day we will be transformed in the twinkling of an eye and will too have the simple, natural grace of a sinless life.

Do you yearn for that day? Are you willing to fight the good fight to the end? We are given the example in Christ’s childhood, and through His sacrifice, we are given the power to be overcomers.

IN FAVOR WITH MANKIND

Jesus was loved on Earth. Despite stirring anger and hatred in the hearts of those who eventually killed Him, His love, gentleness, and meekness in adulthood attracted multitudes and won Him loyal friends like Martha, Lazarus, and Mary.

“As a child, Jesus manifested a peculiar loveliness of disposition. His willing hands were ever ready to serve others. He manifested a patience that nothing could disturb, and a truthfulness that would never sacrifice integrity. In principle firm as a rock, His life revealed the grace of unselfish courtesy,” (The Desire Of Ages, p. 69).

Efficiency, patience, honesty, selflessness, courtesy, principle…these are all qualities that would befit us to have. Christians can only truly share the Gospel by being Christ-like. Without sacrificing principle or belief, we are to make a positive influence on those around us.

We must not excuse inefficiency, selfishness, pride, judgementalism, un-Christian behavior by blaming it on the world's prejudice. May God help us to be “blameless and harmless, the sons of God, without rebuke, in the midst of a crooked and perverse nation, among whom [we] shine as lights in the world;” (Philippians 2:15) so that we too may be found in favor with God and man.