One Truth, Many Lies

Editorial
One truth and many lies

We’re living in a society with so much false information that it’s only through the guidance of God and His Word that we can discern what is real and genuine.

Civilization is quickly racing toward the close of history on a fallen planet. The prophecies revealed in the Holy Scriptures are rushing to their final fulfillment. As the masses of earth’s teeming multitudes drag the Ten Commandments into the dust, there is one commandment that is really taking a beating right now. It’s the ninth commandment, “Thou shalt not bear false witness against thy neighbour” (Exodus 20:16).

What does it mean to bear false witness? It’s reporting something as being real when it’s not. It’s hiding what is genuine and replacing it with the artificial. This habit has now become so widespread, so commonplace, so entrenched in today’s society that many people do not even have any sort of pulse or sense of what is really happening.

In refreshing contrast, Jesus Christ identified Himself as “the way, the truth, and the life” (John 14:6). Yet how many of those who profess to follow Him don’t seem to care much about truth as plainly revealed in what is written as a “Thus saith the Lord.”

Where are we now?

How did we arrive at such a point in history? The atheist insists there is no God. The agnostic simply avoids the topic by claiming not to know. Yet, how can the overwhelming evidence be evaded? It’s by assuming that there cannot be a God because surely He would not permit the horrible suffering that exists in the world. But the doubters do not seek to understand God’s loving character in the perfect blend of noble justice and tender mercy. They do not choose to pursue His handwriting in earth, sea, and sky—and in the lives of human beings made in His image as free moral agents, not robots.

Choosing instead to seek reality

How can we get off this whirling merry-go-round of lies? There is one truth, and one source of truth—the Lord Jesus Christ. As we keep our eyes fixed on Him whom our sins have pierced, we have hope. Looking heavenward to the Author of life, the Sustainer of life, and the Provider of eternal life, we see a very different picture than the twisted one etched by the lies the world has to offer.

Our Creator poses a challenge to all of us: “Assemble yourselves and come; draw near together, ye that are escaped of the nations: they have no knowledge that set up the wood [or perhaps electronic devices or whatever] of their graven image, and pray unto a god that cannot save. Tell ye, and bring them near; yea, let them take counsel together: who hath declared this from ancient time? who hath told it from that time? have not I the Lord? And there is no God else beside me; a just God and a Saviour: there is none beside me. Look unto me, and be ye saved, all the ends of the earth: for I am God, and there is none else” (Isaiah 45:20–22). 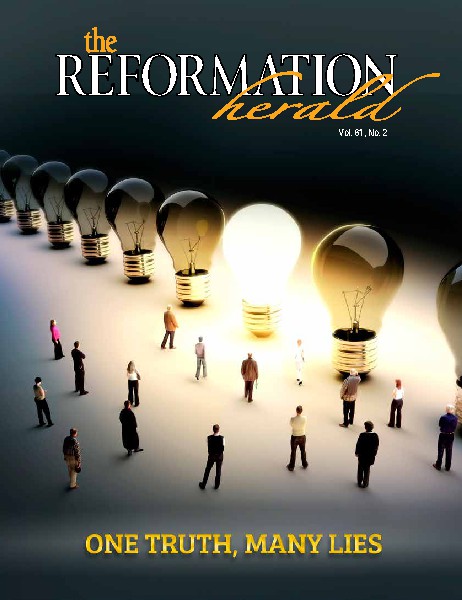