Editorial
Woes on the Pharisses

In His last visit to the temple in Jerusalem, Jesus exposed the real character of the rulers, priests and Pharisees so that the people could be free from their manipulative leadership.

The first warning given by Christ regarding their leaders was that they should receive their instructions but not act like them, because “they say, and do not.”

They were good theoretical teachers, but their behavior contradicted their teachings, which was the reason why their instructions had no power. Christ was exactly the opposite. He taught what He lived and He lived what He taught.

An inconsistent life is confusing. When I was just a little boy, I got confused when my father took me to a highly respected medical doctor. He was telling me that smoking is a very dangerous habit, however, at the same time, he was smoking. I couldn't harmonize his words with his actions. I was not sure if smoking was really a bad habit, since the doctor was using a cigarette in front of his patients.

“There is an eloquence far more powerful than the eloquence of words in the quiet, consistent life of a pure, true Christian. What a man is has more influence than what he says. A godly life is a living epistle, known and read of all men.

“Character is not something shaped from without, or put on; it is something radiating from within. If true goodness, purity, meekness, and equity are dwelling in the heart, this will be manifest in the character; and such a character is full of power.” 1

“I feel an intense desire that our brethren and sisters shall be correct representatives of Jesus. Do not pierce His wounds afresh, and put Him to an open shame, by an inconsistent life. Become thoroughly acquainted with the reasons of our faith, and show by word and act that Christ is dwelling in your hearts by faith. May God help you to walk with Jesus. If you do, you will be the light of the world, and in the time of trouble He will say, Come, my people, enter thou into thy chambers, and shut thy doors about thee; hide thyself as it were for a little moment, until the indignation be overpast.' ” 2

In order to live a consistent life, we need God's grace to resist temptation. It is very easy to teach others to do right while we ourselves are acting contrary to what we teach. This is a Pharisaical trait of character.

In Revelation 1:3, we have a blessed promise: “Blessed is he that readeth, and they that hear the words of this prophecy, and keep those things which are written therein: for the time is at hand.”

James said something similar: “But be ye doers of the word, and not hearers only, deceiving your own selves. For if any be a hearer of the word, and not a doer, he is like unto a man beholding his natural face in a glass. For he beholdeth himself, and goeth his way, and straightway forgetteth what manner of man he was. But whoso looketh into the perfect law of liberty, and continueth therein, he being not a forgetful hearer, but a doer of the work, this man shall be blessed in his deed” (James 1:22–25). 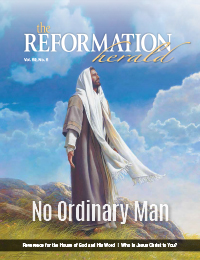