Christ in His Sanctuary

The fourth commandment is the only one in the whole law that identifies its divine Author, “for in six days the Lord made heaven and earth, the sea, and all that in them is, and rested the seventh day: wherefore the Lord blessed the sabbath day, and hallowed it” (Exodus 20:11).

In several Scriptures the Sabbath is identified as a sign between God and His people:

Why is Sabbathkeeping so important for God’s people? It is the memorial of creation and redemption. On Friday afternoon of the sixth day of creation, God finished His work and rested and sanctified the Sabbath. On Friday afternoon of the sixth day, Christ finished the work of redemption when He surrendered His life on the cross of Calvary and rested on the Sabbath. Of His faithful disciples it is written that they “rested the sabbath day according to the commandment” (Luke 23:56).

“By thus setting apart the Sabbath, God gave the world a memorial. He did not set apart one day and any day in seven, but one particular day, the seventh day. And by observing the Sabbath, we show that we recognize God as the living God, the Creator of heaven and earth.”1

“What is the condition of those who keep the commandments of God and have the faith of Jesus? If in families there are those who are refusing obedience to the Lord in keeping His Sabbath, then the seal cannot be placed upon them. The sealing is a pledge from God of perfect security to His chosen ones. Sealing indicates you are God’s chosen. He has appropriated you to Himself. As the sealed of God we are Christ’s purchased possession, and no one shall pluck us out of His hands.”2

“The Sabbath is a token between God and His people. It is a holy day, given by the Creator to us as a day upon which to rest, and reflect upon sacred things. God designed it to be observed through every age as a perpetual covenant.”3

“Not all who profess to keep the Sabbath will be sealed. There are many even among those who teach the truth to others who will not receive the seal of God in their foreheads. They had the light of truth, they knew their Master’s will, they understood every point of our faith, but they had not corresponding works. These who were so familiar with prophecy and the treasures of divine wisdom should have acted their faith. They should have commanded their households after them, that by a well-ordered family they might present to the world the influence of the truth upon the human heart. . . .

“Not one of us will ever receive the seal of God while our characters have one spot or stain upon them. It is left with us to remedy the defects in our characters, to cleanse the soul temple of every defilement. Then the latter rain will fall upon us as the early rain fell upon the disciples on the Day of Pentecost.”4

According to this last quotation, merely professing to keep the Sabbath is not enough to be sealed. We need a close relationship with Christ, obeying by grace His sacred words.

“Those who would have the seal of God in their foreheads must keep the Sabbath of the fourth commandment. This is what distinguishes them from the disloyal, who have accepted a man-made institution in the place of the true Sabbath. The observance of God’s rest day is the mark of distinction between him that serveth God and him that serveth Him not.”5

Our passport to Heaven

Especially those who travel overseas know how essential it is to bear a passport. We may do all the necessary preparation for a trip, we may have enough money and all of our luggage well packed—but even after having bought our tickets, if we have no passport, we cannot travel at all. Period.

What is our passport to the heavenly mansions?

“Higher education is an experimental knowledge of the plan of salvation, and this knowledge is secured by earnest and diligent study of the Scriptures. Such an education will renew the mind and transform the character, restoring the image of God in the soul. It will fortify the mind against the deceptive whisperings of the adversary, and enable us to understand the voice of God. It will teach the learner to become a coworker with Jesus Christ, to dispel the moral darkness about him, and bring light and knowledge to men. It is the simplicity of true godlinesss—our passport from the preparatory school of earth to the higher school above.”6

“He who cooperates with the divine purpose in imparting to the youth a knowledge of God, and molding the character into harmony with His, does a high and noble work. As he awakens a desire to reach God’s ideal, he presents an education that is as high as heaven and as broad as the universe; an education that cannot be completed in this life, but that will be continued in the life to come; an education that secures to the successful student his passport from the preparatory school of earth to the higher grade, the school above.”7

“ ‘Though the Lord be high, yet hath He respect unto the lowly’ (Psalm 138:6). Those who reveal the meek and lowly spirit of Christ are tenderly regarded by God. They may be looked upon with scorn by the world, but they are of great value in His sight. Not only the wise, the great, the beneficent, will gain a passport to the heavenly courts; not only the busy worker, full of zeal and restless activity. No; the poor in spirit, who crave the presence of an abiding Christ, the humble in heart, whose highest ambition is to do God’s will—these will gain an abundant entrance. They will be among that number who have washed their robes and made them white in the blood of the Lamb. ‘Therefore are they before the throne of God, and serve Him day and night in His temple: and He that sitteth on the throne shall dwell among them’ (Revelation 7:15).”8

“The rabbis counted their righteousness a passport to heaven; but Jesus declared it to be insufficient and unworthy. External ceremonies and a theoretical knowledge of truth constituted Pharisaical righteousness. The rabbis claimed to be holy through their own efforts in keeping the law; but their works had divorced righteousness from religion. While they were punctilious in ritual observances, their lives were immoral and debased. Their so-called righteousness could never enter the kingdom of heaven.”9

“Jesus Christ has given Himself as a complete offering in behalf of every fallen son and daughter of Adam. O what humiliation He bore! How He descended, step after step, lower and lower in the path of humiliation, yet He never degraded His soul with one foul blot of sin! All this He suffered, that He might lift you up, cleanse, refine, and ennoble you, and place you as a joint heir with Himself upon His throne. How shall you make your calling and election sure? What is the way of salvation? Christ says, ‘I am the way, the truth, and the life’ (John 14:6). However sinful, however guilty you may be, you are called, you are chosen. ‘Draw nigh to God, and He will draw nigh to you’ (James 4:8). Not one will be forced against his will to come to Jesus Christ. The Majesty of heaven, the only-begotten Son of the true and living God, opened the way for you to come to Him, by giving His life as a sacrifice on Calvary’s cross. But while He suffered all this for you, He is too pure, He is too just, to behold iniquity. But even this need not keep you away from Him; for He says, ‘I came not to call the righteous, but sinners to repentance’ (Mark 2:17). Let perishing souls come to Him just as they are, without one plea, and plead the atoning blood of Christ, and they will find acceptance with God, who dwelleth in glory between the cherubim above the mercy seat. The blood of Jesus is a never-failing passport, by which all your petitions may find access to the throne of God.”10

“Jesus receives and welcomes you as His own friend. He loves you; He has pledged Himself to open before you all the treasures of His grace for your appropriation. He says, ‘At that day ye shall ask in my name: and I say not unto you, that I will pray the Father for you: for the Father himself loveth you, because ye have loved me, and have believed that I came out from God’ (John 16:26, 27). He virtually says, Make use of My name, and it will be your passport to the heart of My Father, and to all the riches of His grace.”11

“Only those who receive the seal of the living God will have the passport through the gates of the Holy City.”12

“Will this seal be put upon the impure in mind, the fornicator, the adulterer, the man who covets his neighbor’s wife? Let your souls answer the question, Does my character correspond to the qualifications essential that I may receive a passport to the mansions Christ has prepared for those who are fitted for them? Holiness must be inwrought in our character.

“God has shown me that at the very time that the signs of the times are being fulfilled around us, when we hear, as it were, the tread of the hosts of heaven fulfilling their mission, men of intelligence, men in responsible positions, will be putting rotten timbers in their character building—material which is consumable in the day of God, and which will decide them to be unfit to enter the mansions above. They have refused to let go the filthy garments; they have clung to them as if they were of precious value. They will lose heaven and an eternity of bliss on account of them.”13

“All self-righteousness must be given up, for we have no righteousness of ourselves. It is the gift of God; therefore we should not be exalted, or buy any means pretentious, for it is an offense to God. What have we that we have not received? Man cannot rely upon himself for anything good or righteous. Christ, only Christ and His righteousness, will obtain for us a passport into heaven.”14

“When God’s people are clothed with white robes and crowned as true subjects of His kingdom, those who have been disloyal will see the inconsistency of their uniting with the loyal to honor and magnify the law of God, which they have educated themselves to disregard. They have regarded the law of God as null and void, and should they be trusted to come through the gates into the city? They then find that they have no passport, nothing in them that can change their life sentiments. They have made their choice of false sentiments in the place of truth, and holiness, and righteousness, and they cannot change them. Every man who, by his actions, has declared, I will not have this Man to reign over me, will no longer have the privilege of being under that rule.”15 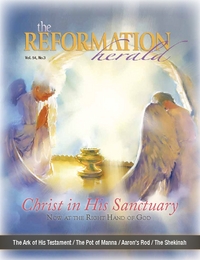