At the Brink of Eternity

Editorial
At the Brink of Eternity

The Israelites were nearing the Promised Land—their final destination, their ultimate goal. Forty years of travel in the wilderness was now behind them. Because of their constantly rebellious attitude, most of them had been left behind, dead in the desert.

Satan was not happy. He would do his most to hinder God’s people from entering Canaan. Now he would use an apostate prophet to cause great damage to that multitude in order to make God displeased with them, that they might be destroyed.

Balaam in time past had been God’s prophet, but then he apostatized. Now the former prophet of God presented to Balak a devilish plan as to how to destroy God’s people exactly when they were at the very borders of Canaan. In his plan he included friendship with pagans, sensual music, dancing, sensuous women and wine to becloud their senses and entice them into gross and degrading idolatry.

The Bible sums it up saying that “Israel abode in Shittim, and the people began to commit whoredom with the daughters of Moab. And they called the people unto the sacrifices of their gods: and the people did eat and bowed down to their gods” (Numbers 25:1, 2).

God sent a severe plague that destroyed 24,000 Israelites. Reviewing this terrible moral disaster and its immediate consequences, Paul wrote: “Now these things were our examples, to the intent we should not lust after evil things, as they also lusted. Neither be ye idolaters, as were some of them; as it is written, The people sat down to eat and drink, and rose up to play. Neither let us commit fornication, as some of them committed. . . . Now all these things happened unto them for ensamples: and they are written for our admonition, upon whom the ends of the world are come” (1 Corinthians 10:6–8, 11).

We are living at the brink of eternity. This is a very solemn and perilous time when we expect to see the Lord very soon, and Satan will use his most powerful weapons to hinder God’s people from entering the heavenly Promised Land.

“Satan well knows the material with which he has to deal in the human heart. He knows—for he has studied with fiendish intensity for thousands of years—the points most easily assailed in every character; and through successive generations he has wrought to overthrow the strongest men, princes in Israel, by the same temptations that were so successful at Baalpeor. All along through the ages there are strewn wrecks of character that have been stranded upon the rocks of sensual indulgence. As we approach the close of time, as the people of God stand upon the borders of the heavenly Canaan, Satan will, as of old, redouble his efforts to prevent them from entering the goodly land. He lays his snares for every soul. It is not the ignorant and uncultured merely that need to be guarded; he will prepare his temptations for those in the highest positions, in the most holy office; if he can lead them to pollute their souls, he can through them destroy many. And he employs the same agents now as he employed three thousand years ago. By worldly friendships, by the charms of beauty, by pleasure seeking, mirth, feasting, or the wine cup, he tempts to the violation of the seventh commandment. . . .

“It was when the Israelites were in a condition of outward ease and security that they were led into sin. They failed to keep God ever before them, they neglected prayer and cherished a spirit of self-confidence. Ease and self-indulgence left the citadel of the soul unguarded, and debasing thoughts found entrance. It was the traitors within the walls that overthrew the strongholds of principle and betrayed Israel into the power of Satan. It is thus that Satan still seeks to compass the ruin of the soul. A long preparatory process, unknown to the world, goes on in the heart before the Christian commits open sin. The mind does not come down at once from purity and holiness to depravity, corruption, and crime. It takes time to degrade those formed in the image of God to the brutal or the satanic. By beholding we become changed. By the indulgence of impure thoughts man can so educate his mind that sin which he once loathed will become pleasant to him.”1

“Wherefore let him that thinketh he standeth take heed lest he fall” (1 Corinthians 10:12).

May the Lord be gracious and merciful with His people as we approach the heavenly Canaan! 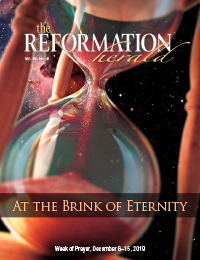