Organization in the Work of God’s People
Alfons Balbach

From the top of a mountain, Balaam contemplated the encampment of God’s chosen people. And he was amazed. While his mind was full of curses he had prepared, he was constrained to pronounce blessings. He said: “How shall I curse, whom God hath not cursed?” (Numbers 23:8).

“As Balaam looked upon the encampment of Israel he beheld with astonishment the evidence of their prosperity. They had been represented to him as a rude, disorganized multitude, infesting the country in roving bands that were a pest and terror to the surrounding nations; but their appearance was the reverse of all this. He saw the vast extent and perfect arrangement of their camp, everything bearing the marks of thorough discipline and order. He was shown the favor with which God regarded Israel, and their distinctive character as His chosen people. They were not to stand upon a level with other nations, but to be exalted above them all.”1

In the plan of God, we have been put together so that we may work together, feeling our dependence upon one another. This is why church organization is a must. The importance of teamwork is also emphasized in the Bible.

Among the early Christians the two-by-two method worked as an ambulatory school. An experienced worker and a younger brother formed a team of two and worked together. When the younger one had gained enough experience, he became the instructor of a new apprentice that was assigned to him. In this way, the teams kept multiplying.

It is never too late to implement this method. All those who decide to join and work together for a good purpose prove to be wise.

The apostle Paul says we should learn a lesson of unity and cooperation from the human body.

Suppose you are in the middle of an orchard, it’s time to eat, and you are getting hungry. How many organs work together? First, the stomach sends a message to the mind, and the mind tells the eyes to look around for the trees laden with apples, pears, prunes, figs, and so on. Then in order to reach these fruits, the eyes will depend on the legs to take you to the trees. Then the mind directs the eyes and hands to the fruits that you choose to pick. The eyes examine the fruits to make sure they are not wormy. When the fruit reaches the mouth, the nose with its sense of smell and the tongue with its taste buds must approve or reject it. If it is accepted, then the teeth begin to work with the help of the tongue. After the food has been masticated and swallowed, the stomach is happy to receive and digest it. What would happen if suddenly these organs refused to work together, in perfect cooperation and independence? The results would be confusion, chaos, and eventually death.

“From whom the whole body fitly joined together and compacted by that which every joint supplieth, according to the effectual working in the measure of every part, maketh increase of the body unto the edifying of itself in love.”

“And [ye] are built upon the foundation of the apostles and prophets, Jesus Christ himself being the chief corner stone; in whom all the building fitly framed together groweth unto an holy temple in the Lord: in whom ye also are builded together for an habitation of God through the Spirit” (Ephesians 2:20–22).

Scattered stones do not form a “building”; the “holy temple” “groweth” as the stones are “builded together,” “fitly framed together,” for the “habitation” of God.

Unfortunately, this biblical doctrine is not understood by everyone who calls upon the name of the Lord (Matthew 7:21, 22). I have seen this on more than one or two occasions.

Many years ago, when I was still living in São Paulo, Brazil, my attention was attracted to the visitors who had come to our church service. Among them were a couple who seemed to be serious Christians.

I saw them for the first time. When the meeting was over, I felt it would be good to talk to them.

“Thank you for your visit and come again,” I said.

They identified themselves as Christian believers. I found the door open to inquire about their religious position.

In the course of our conversation, they said that their religious beliefs were entirely based on the Bible. I was curious to know which denomination they were affiliated with, so I asked them:

“We certainly do,” they assured me.

“So you must belong to a church.”

“Then, may I ask you, which church do you belong to?”

“My wife and myself. This is our church,” the man said.

How could they ignore the prayer of Christ in behalf of His followers “that they all may be one” (John 17:21)?

“There has ever been a class professing godliness, who, instead of following on to know the truth, make it their religion to seek some fault of character or error of faith in those with whom they do not agree. Such are Satan’s right-hand helpers. Accusers of the brethren are not few, and they are always active when God is at work and His servants are rendering Him true homage. They will put a false coloring upon the words and acts of those who love and obey the truth. They will represent the most earnest, zealous, self-denying servants of Christ as deceived or deceivers. It is their work to misrepresent the motives of every true and noble deed, to circulate insinuations, and arouse suspicion in the minds of the inexperienced. In every conceivable manner they will seek to cause that which is pure and righteous to be regarded as foul and deceptive.”2

Identifying the children of Abraham

“Know ye therefore that they which are of faith, the same are the children of Abraham” (Galatians 3:7).

The religious assurance of the Jewish people in the days of Christ was based on the thought that they had nothing to fear as far as their acceptance before God because they were the children of Abraham, to whom the Almighty had promised: “I will make of thee a great nation, and I will bless thee, and make thy name great; and thou shalt be a blessing: And I will bless them that bless thee, and curse him that curseth thee: and in thee shall all families of the earth be blessed” (Genesis 12:2, 3).

To disabuse them from their false ideas, John the Baptist warned them:

“Think not to say within your-selves, We have Abraham to our father: for I say unto you, that God is able of these stones to raise up children unto Abraham” (Matthew 3:9).

The adopted children of Abraham were not isolated, scattered stones. They were organized as a church. Matthew 16:18, 19.

“The Sanhedrin had rejected Christ’s message and was bent upon His death; therefore Jesus departed from Jerusalem, from the priests, the temple, the religious leaders, the people who had been instructed in the law, and turned to another class to proclaim His message, and to gather out those who should carry the gospel to all nations.

“As the light and life of men was rejected by the ecclesiastical authorities in the days of Christ, so it has been rejected in every succeeding generation. Again and again the history of Christ’s withdrawal from Judea has been repeated. When the Reformers preached the word of God, they had no thought of separating themselves from the established church; but the religious leaders would not tolerate the light, and those that bore it were forced to seek another class, who were longing for the truth.”3

“Christ foresaw that the undue assumption of authority indulged by the scribes and Pharisees would not cease with the dispersion of the Jews. He had a prophetic view of the work of exalting human authority to rule the conscience, which has been so terrible a curse to the church in all ages. And His fearful denunciations of the scribes and Pharisees, and His warnings to the people not to follow these blind leaders, were placed on record as an admonition to future generations.”4

“The Pharisees had declared themselves the children of Abraham. Jesus told them that this claim could be established only by doing the works of Abraham. The true children of Abraham would live, as he did, a life of obedience to God. They would not try to kill One who was speaking the truth that was given Him from God. In plotting against Christ, the rabbis were not doing the works of Abraham. A mere lineal descent from Abraham was of no value. Without a spiritual connection with him, which would be manifested in possessing the same spirit, and doing the same works, they were not his children.

“This principle bears with equal weight upon a question that has long agitated the Christian world—the question of apostolic succession. Descent from Abraham was proved, not by name and lineage, but by likeness of character. So the apostolic succession rests not upon the transmission of ecclesiastical authority, but upon spiritual relationship. A life actuated by the apostles’ spirit, the belief and teaching of the truth they taught, this is the true evidence of apostolic succession. This is what constitutes men the successors of the first teachers of the gospel.”5

The vine and the branches

The people, who, in accordance with God’s word, are putting forth every effort to be one, are not isolated branches; they are closely united with the “Vine,” our Saviour, who warned us:

“I am the vine, ye are the branches: He that abideth in me, and I in him, the same bringeth forth much fruit: for without me ye can do nothing” (John 15:5).

Isolated dry branches (put together in a heap to be burnt) and isolated dead bones (collected for the crematorium) cannot represent the church of Christ according to the Scriptures.

In the “great house,” which is the church, “there are not only vessels of gold and of silver, but also of wood and of earth; and some to honour, and some to dishonour” (2 Timothy 2:20).

Where are these “vessels”? In the home, not scattered outside.

In conclusion we may establish that among the people of God, perfect order and discipline are essential traits.

“I saw that everything in heaven was in perfect order. Said the angel, ‘Look ye; Christ is the head . . .’ ‘Behold ye, and know how perfect, how beautiful the order in heaven; follow it.’ ”6 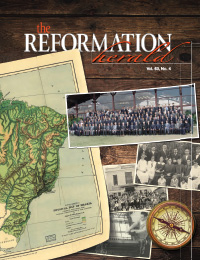